Selected among the 2018 Canada's Top 40 Under 40, Award-winning actress, filmmaker, speaker, business owner and consultant, Fabienne Colas is the ‘Queen of Festivals’ who created and manages 7 successful festivals between Montreal, Toronto, Halifax, New York City and Port-au-Prince.
7 Award-winning actress, director, producer and speaker Fabienne Colas is still considered the most popular in Haitian cinema. She has received several awards, including the Ticket d’or (golden ticket) for best actress in the film Barikad.

In 2017, she received the prestigious Harry Jerome Arts and Culture Award from the Black Business Professional Association in Toronto. In 2018, Femmes en cinéma, télévision et médias numériques (FCTMN) paid tribute to Fabienne for her exceptional contribution to the Quebec film industry. She is also a 2018 finalist for the Charles Biddle Award.

Fabienne is a Union des artistes (UdA) and Alliance of Canadian Television and Radio Artists (ACTRA) member, two professional Canadian actors’ unions. She has sat on many prestigious juries in Canada’s and Quebec’s arts communities, including those of the Canada Council for the Arts, the Conseil des arts et des lettres du Québec and les Prix Gémeaux.

She started her career as a model, being crowned Miss Haiti 2000. Since then, she has represented her home country in numerous beauty contests around the world. After a successful film career in Haiti, Fabienne decided to pursue her career in Quebec, playing roles in various small and big screen productions such as Watatatow, L’Auberge du chien noir, Comment conquérir l’Amérique en une nuit by Dany Laferrière, Virginie, and Trauma. In 2008, she directed and produced her first film Minuit, in which she played the leading role. Her film was also selected for the Rendez-vous du cinéma québécois and the Montreal Haitian Film Festival. As chairman of the Fabienne Colas Foundation, she supports, awards grants and promotes independent films and artists who would otherwise not have been seen or heard. In 2015, Fabienne was awarded a medal from Quebec’s National Assembly for her leadership and contribution to fighting against racism and discrimination across Quebec.  In 2010, she won the Black History Month Award for her active involvement in her community.

When she became aware of the situation of black artists in Quebec, Fabienne decided to throw her body and soul into supporting and promoting black culture and independent films on the international scene. She created her self-titled foundation to accomplish this goal. Fabienne’s mission is to continue creating platforms that show a diversity of voices, faces and points of view. Every year, Fabienne contributes to fundraising campaigns for various social, humanitarian, community and cultural causes.

She is the president and founder of the Fabienne Colas Foundation, a foundation dedicated to changing how people see the world through cinema, art and culture. Additionally, she is the founding president of many popular international festivals that attract more than one hundred thousand festival-goers each year, international celebrities and incredible media coverage: the Montreal International Black Film Festival (MIBFF), Canada’s largest black film festival; the Toronto Black Film Festival (TBFF); the Festival Haïti en Folie [Haiti on Fire] in Montreal and New York City, the largest multi-disciplinary festival outside Haiti entirely dedicated to Haitian culture; the Fade to Black Festival in Montreal, dedicated to celebrating Black History Month; the Quebecois Film Festival in Haiti; the new Halifax Black Film Festival and more. Through Zaza Production, her media and business consulting company, Fabienne Colas and her team help people and businesses unlock their greatness with strategic custom-made plans, get unprecedented media attention, and position or reposition their brand to get traction and massive sales.  The organization is also dedicated to organizing cultural events, managing various trademarks, creating and managing websites, and producing independent films and content.

Colas was nominated and chosen by the U.S. State Department as the 2017 as a leader to represent Canada in the International Visitor Leadership Program (IVLP), a three-week exchange leadership program that represented 47 countries. She is also a finalist for the 2018 Prix Femmes d’affaires du Québec. In 2017, she sat as a board member on the Society for the Celebrations of Montréal’s 375th Anniversary.

Her organization has already carried out projects for both cultural businesses and foreign organizations such as the European Union. In 2011, she obtained a licence for two television stations, from the Canadian Radio-television Telecommunications Commission (CRTC), with a view to promoting a better representation of cultural diversity on televisions in Canada. As an actor from a culturally diverse community living in Quebec since 2005, Fabienne is invited in this capacity to various discussion panels, conferences, debates, consultations and interviews to discuss issues connected with festivals and with the representation of diversity in the Canadian media and on the job market. She mentors various young people and immigrants. Fabienne has often become involved with underprivileged youth in schools and community centres on the issues of staying in school, academic achievement, self-esteem and excellence. She continues to fight for the representation of diversity on screens and in the media, as well as for equal opportunity for all!

After the January 2010 earthquake in Haiti, Fabienne appeared on all the media platforms calling on Canadian government authorities to soften immigration rules and encouraging them to make it easier for Haitian nationals affected by the earthquake to come to Canada. As a result, the government accelerated the reunion of families through special and exceptional measures. She also called on telecommunications companies to allow Haitians living in Canada to call their loved ones in Haiti for free, which the Vidéotron phone company agreed to do 48 hours later, for 30 days. Lastly, Fabienne was one of the thousands of voices to call on the general public to give generously for the cause, on top of having herself taken part in fundraising events to support various humanitarian organizations such as the Red Cross.

Fabienne openly campaigned for Barack Obama in 2008. Through telephone calls, social networks and media appearances commenting on American politics, she encouraged her family, friends, loved ones, as well as the general public in the U.S. to go out and vote in these more than historic elections. She continues to get involved in each election, particularly in her community, to persuade the people of cultural communities and immigrants to exercise their right to vote in Canada in federal, provincial and municipal elections.

Fabienne (Colas) is blessed with so many TALENTS and helpful to so many people. The world needs that energy and determination.

It has taken Fabienne Colas five years to do here (in Quebec) what it would sometimes take most Haitians 30 years to accomplish.

The latest mission of overachiever Fabienne Colas is to bring diversity to Quebec television.

The woman behind this festival (Toronto Black Film Festival) is Fabienne Colas. Actress, director, producer, she has always cared about promoting independent cinema across the globe.

Girl from Haiti, woman of action.

People who inspired me

Never be afraid to fail. Be afraid of not learning from mistakes.

Surround yourself with people who want the best for you.

People in Haiti are creative. Haiti inspires me. Everyone should make a trip …

My goal wasn’t to make a ton of money. It was to build good computers.

On top of working on the direct activities of the Foundation, Fabienne Colas also sits on a number of boards, attends festivals and events as a speaker or guest of honour, supports many initiatives, and contributes to many fundraising campaigns for various social, humanitarian, community and cultural causes.

Réal Barnabé, Emile Castonguay and I decided to create the Fabienne Colas Foundation, in order to give a voice and a platform to artists who otherwise, would not have been seen or heard. Since then, the FCF has showcased about 2,000 artists, and every year tens of thousands of people take part in its festivals and initiatives. With your help, the FCF wants to continue to build bridges through the arts! 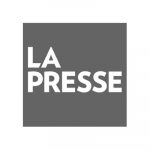